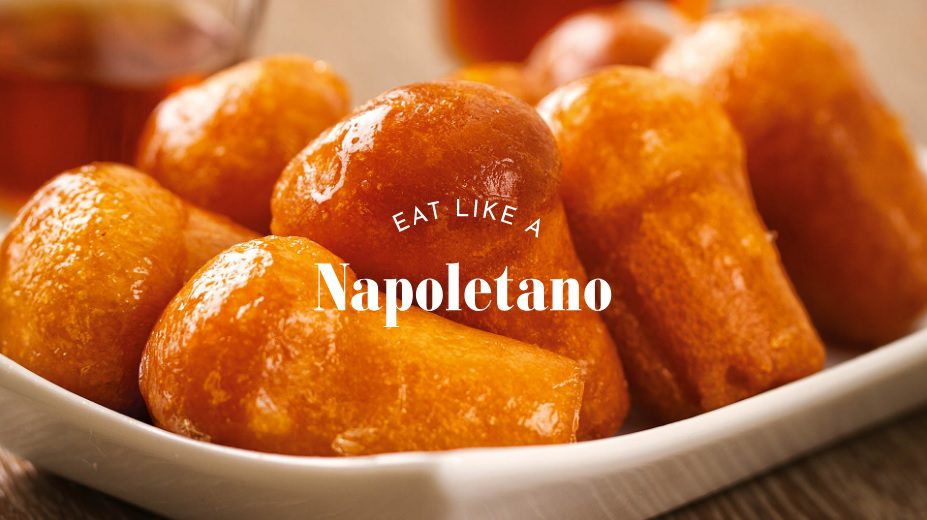 Mild temperature, fertile soils of volcanic origin, favorable exposure. Always. It is no coincidence that the ancient Romans baptized the region around Naples and Vesuvius Campania Felix – happy, and not just because it is kissed by the sun. To the ideal climatic conditions for healthy food Campania add a widespread passion for good cooking: the result today is that not only in Naples, but in the whole region, you can go in search of excellent recipes and typical dishes from Campania cuisine.

The inhabitants of Campania, before becoming pasta eaters in the eighteenth century, were known as “leaf eaters.” The “leaves” before the discovery of America were above all chicory, escarole, and broccoli; some of the latter varieties grow still today only in the countryside of Campania, especially in Salerno: friarelli, for example, a particularly tender broccoli with a bitter vein. Then, in the late 1600s, eggplants and peppers appeared in Campania recipes, and then, finally, tomatoes found their ideal habitat in this region. Choosing from the regional agricultural production, we’ll mention the beans of Alife, Acerra and Controne, the very sweet onions of Aversa, the fleshy peppers of Nocera Inferiore, the potatoes of the Mates and the sought-after Ottaviano peas. For fruit: the peaches and the velvety apricots of Vesuvius, the strawberries of Afragola and the Sele plain, the Annurche apples from Marano di Napoli, the exquisite “giant” walnuts from Sorrento and the precious hazelnuts from Avellino and Benevento.

The plain at the foot of Mount Vesuvius, an agricultural area known since Roman times, gives us one of the most interesting products of Campania: the artichoke from Castellammare, also called Castellammare violet or Schito artichoke. This artichoke is distinctive because of the color of the outer leaves, the violet shades, and its early ripening, which takes place between February and April. Although the plant produces several inflorescences, only the mammolella – i.e. the first apical shoot – is protected by local peasants with small terracotta cups called pignatelle, which keep it particularly tender. The other artichokes of the plant are sold locally, at a lower price, while the last shoots, the “grand-children” are preserved in oil. Precisely for its harvest in spring, the artichoke of Castellammare often appears in the Easter menus of Campania traditional cuisine, often stuffed and stewed in casserole.

For many Neapolitans, the sour smell of the papaccella preserved in oil immediately triggers memories of the holidays: it is a guaranteed presence on the most typical Campania recipes, as well as being one of the main ingredients of the rich salad that is eaten on December 26th. It is a small and slightly crushed pepper, with a fleshy pulp and a ribbed shape. It has an intense flavor, well defined and sweet, but in some areas of the province, spicy versions are also cultivated. The papaccella is cultivated mainly in the Vesuvius territory, in particular in the municipality of Brusciano. Its wide range of colors and shades – from dark to bright red, from dark green to yellow-green, up to a wine shade – creates a unique spectacle on the stalls of Neapolitan markets. In addition to preparations in oil or in vinegar, the papaccella is often inserted in special Campania recipes to prepare pork dishes, or stuffed and baked in the oven.

Those who go to Naples must not miss visiting one of the excellent pastry shops in the city and have breakfast with a flaky, freshly baked sfogliatella: one of the most celebrated Campania desserts, its thin and crispy wrapper contains a creamy filling made of semolina and ricotta, flavored with orange, cinnamon, and vanilla. It seems that the sfogliatellas were created in the monastery of Santa Rosa in Amalfi, which developed, among other things, a variant: the “santarosa,” enriched with cream and black cherry. In 1818, Pintauro gleaned its secret and, turning his tavern in via Toledo in Naples into a patisserie, he spread its production in the soft and flaky version. For certain, they are a small miracle for the eyes and the throat. The pastiera, which cannot miss on the Easter table of Neapolitans even if its production is spread out between November and spring, is one of those Campania desserts born from the popular inventiveness: a crust of shortcrust pastry stuffed with ricotta, wheat cooked in milk, candied fruit, orange blossom water, and eggs. Finally, the Baba, a very iconic and regional dish from Campania cuisine: a soft and buttery paste soaked in rum, which is as synonymous with Campania as the view of Naples is with Vesuvius. Though this sweet that has entered into the current lexicon [“you are a baba” is the most common local compliment], is actually of Polish origin. It comes in all sizes: tiny, slightly larger than a thimble, small, large, mushroom-shaped or donut-like, simple or enriched with whipped cream or covered with sour cherries or fresh fruit. Typical of the Christmas holidays are the struffoli: a small mountain of fried dough balls held together by honey and covered with diavolilli (colored sprinkles). If instead you are visiting Benevento, the classic gastronomic souvenir from the city is the nougat prepared with hazelnuts of the “mortarella” variety typical of High Irpinia. The nougat of Benevento, white and solid, is a gluttony of ancient origin: the Latins called it cupeta and Martial quotes it in one of his epigrams. The good taste of this dessert from Campania comes from honey and fine local hazelnuts, which are part of the traditional recipe along with sugar and egg white. However there are historical nougats, between the Benevento and the Avellino area, which offer tasty and refined variations: thin or mignon, with almonds, covered with chocolate, filled with sponge cake and liqueur.