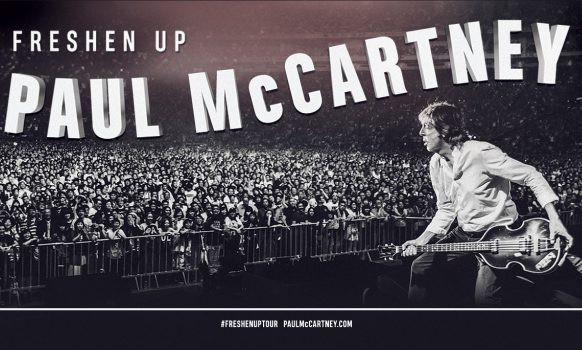 Having wrapped up the most recent leg of the tour with a sold-out show at Los Angeles Dodger Stadium in July, Paul has already performed 39 huge shows across 12 different countries since he launched the Freshen Up global tour.  Winning five-star reviews from critics and fans alike all over the world, the Freshen Up tour which draws in crowds of all ages and backgrounds, showcases Paul’s unparalleled career as both a phenomenal songwriter and performer that confirm his universal appeal.

With songs like ‘Hey Jude’, ‘Live and Let Die’, ‘Band on the Run’ and  ‘Let It Be’ the Paul McCartney live experience is everything any music lover could ever want from a rock show: Nearly three hours of the greatest moments from the last 50 years of music, dozens of songs from Paul’s solo, Wings and of course Beatles catalogues that have formed the soundtracks of our lives.  Paul and his band have performed in an unparalleled range of venues and locations throughout the Americas, the UK, Europe, Japan, Australia, New Zealand and all points between: outside the Coliseum in Rome, Moscow’s Red Square, Buckingham Palace, The White House, a free show in Mexico for over 400,000 people, the last ever show at San Francisco’s Candlestick Park where The Beatles played their final concert in 1966, a 2016 week in the California desert that included two headline sets at the historic Desert Trip festival and a jam-packed club gig  for a few hundred lucky fans at Pappy & Harriet’s Pioneertown Palace, and even one performance broadcast live into Space! Featuring Paul’s band of the last 15+ years – Paul “Wix” Wickens (keyboards), Brian Ray (bass/guitar), Rusty Anderson (guitar) and Abe Laboriel Jr (drums) – and constantly upgraded state of the art audio and video technology that ensures an unforgettable experience from every seat in the house, a Paul McCartney concert is never anything short of life-changing.

Pre-sale Information
Pre-sale tickets will be available to purchase for the above Italy shows from 10am local time on Friday 22nd November. To purchase pre-sale tickets, click the link below and enter the password: