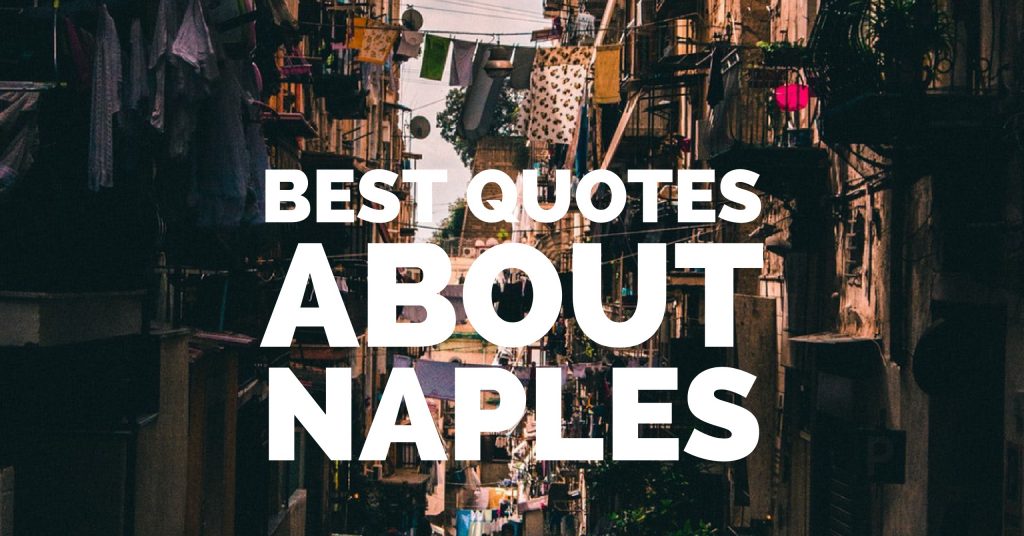 We like to describe Naples as chaos incarnate. It has a life of its own, that seems to head in every direction at once, but then comes together into a sort of untouchable harmony that energizes your soul. And because I would love to let you know more about the city, we collected together our favorite quotes about Napoli.

In the shadow of Mt. Vesuvius, Naples has inspired writers and artists for centuries.

To recognize this unique city, here are the best quotes about Naples:

Rome is stately and impressive, Florence is all beauty and enchantment, Genoa is picturesque, Venice is a dream city, but Naples is simply — fascinating.
– Lilian Whiting

Naples is curiously chaotic and, if I’m honest, a bit dilapidated. It certainly has a ‘lived-in’ look. It’s alive, it’s vibrant, it’s a little bit dirty, it’s busy, and I loved it.
– Paul Hollywood

I won’t say another word about the beauties of the city and its situation, which have been described and praised often. As they say here, “Vedi Napoli e poi muori! See Naples and die!” One can’t blame the Neapolitan for never wanting to leave his city, nor its poets singing its praises in lofty hyperboles: it would be wonderful even if a few more Vesuviuses were to rise in the neighbourhood.
– Johann Wolfgang von Goethe

Here we are at last. The Italian proverb says “See Naples and die” but I say, see Naples and live; for there seems a great deal worth living for.
– Arthur John Strutt

Naples is the flower of paradise. The last adventure of my life.
– Alexandre Dumas

I have a concept of Naples that is not so much of a city per se but rather an ingredient of the human spirit that I detect in everyone, Neapolitan or not. The idea that ‘Neapolitanism’ and mass ignorance are somehow indissolubly linked is one that I am prepared to fight with all the strength I have. Quite simply, I refuse to believe that the living conditions of a population can only be improved at the cost of annihilating everything human in their way of life. Indeed, there are times when I think that Naples represents the last remaining hope for the human race.
– Luciano De Crescenzo

…the city of Naples was like this: wonderful from a distance, but when seen close up, it was fragmentary, indefinable, and coarse…
– Franco Di Mare

Naples sitteth by the sea, keystone of an arch of azure, Crowned by consenting nations peerless queen of gayety: She laugheth at the wrath of Ocean, she mocketh the fury of Vesuvius, She spurneth disease, and misery, and famine, that crowd her sunny streets.
– Martin Farquhar Tupper

He who doesn’t love Naples, has yet to learn how to love life.
– Anonymous

Naples is a paradise: in it every one lives in a sort of intoxicated self-forgetfulness. It is even so with me: I scarcely know myself; I seem to myself quite an altered man. Yesterday I said to myself, “Either you have always been mad, or you are so now.”
– Johann Wolfgang von Goethe


Are there any other quotes about Naples that you love?

2 Replies to “BEST QUOTES ABOUT NAPLES”