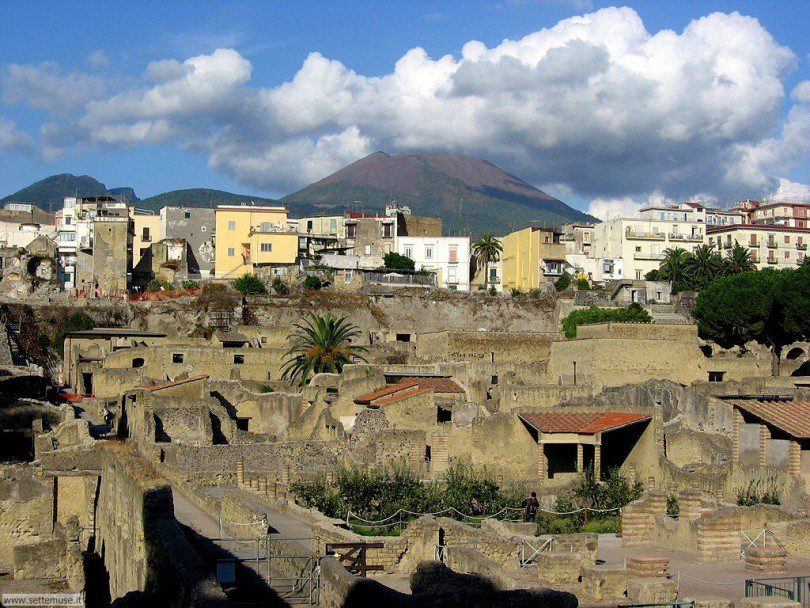 The town of Herculaneum suffered the same fate as Pompeii. The town was buried under Mount Vesuvius’s volcanic ashes and mud in 79 AD.

Hit before Pompeii, many inhabitants didn’t have time to escape and were engulfed in layers of debris, ashes and mud, dying instantly to be preserved for centuries.

At the foot of Mount Vesuvius, the city was the volcano’s first victim, and therefore the first wall of lava, ashes, debris and gases covered Herculaneum completely a little after midnight on 25 August. The previous day, it had been plunged in a cloud of debris leaving it without sunlight.

A UNESCO world heritage site, Herculaneum is better preserved than Pompeii. The city’s houses, baths, taverns, temples and figures are undamaged; therefore, visitors will get a real sense of the splendour of this Roman city.

Wealthier than its neighbouring Pompeii, the town is full of beautiful buildings. The different floors of most of the buildings are still intact and it is possible to see the magnificent frescoes and mosaics covering the walls of palaces, public buildings and mansions.

On the far side of the city are the most luxurious villas overlooking the sea, notably the Villa dei Papiri, which was the luxurious retreat of Julius Caesar’s father-in-law.

In Herculaneum, archaeologists have also found the first Roman preserved skeletons from the first century, since prior to this period Romans would cremate the dead. The skeletons are on display in one of the city’s houses.

The town of Herculaneum has been magically conserved all these years. Objects like beds, and doors managed to remain under the layers of ash and mud without decaying.

Although it isn’t as well-known or as large as Pompeii, Herculaneum’s ruins are extremely impressive and gripping. Definitely worth visiting!

Today, the town of Ercolano lies extremely close to the ruins of Herculaneum, creating an interesting contrast.

The most common ways of getting to Herculaneum from Napoli are: