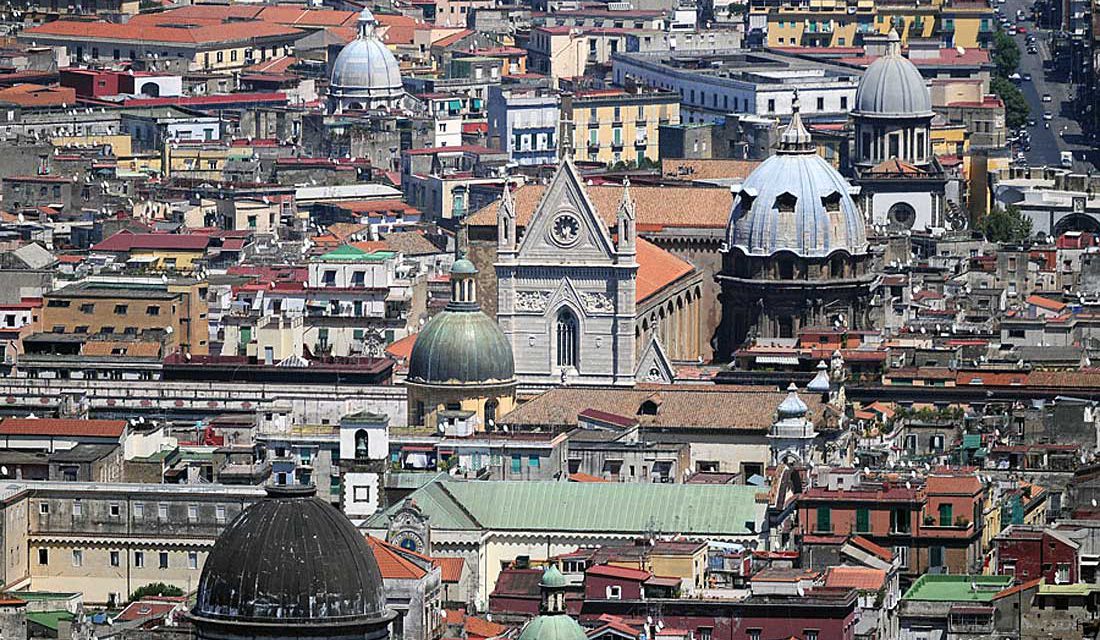 The tour of the churches of Naples would be endless! We have chosen 6, certainly among the most beautiful. Are you ready? Go!

Chiesa del Gesù Nuovo
The church is the final resting place of much-loved local saint Giuseppe Moscati (1880–1927), a doctor who served the city’s poor. Adjacent to the right transept, the Sale di San Giuseppe Moscati (Rooms of St Joseph Moscati) include a recreation of the great man’s study, complete with the armchair in which he died. Scan the walls for ex-voti, gifts offered by the faithful for miracles purportedly received. The church itself received a miracle of sorts on 4 August 1943, when a bomb dropped on the site failed to explode. Its shell is aptly displayed beside the ex-voti. The church flanks the northern side of beautiful Piazza del Gesù Nuovo, a favourite late-night hang-out for students and lefties. At its centre soars Giuseppe Genuino’s lavish Guglia dell’Immacolata, an obelisk built between 1747 and 1750. On 8 December, the Feast of the Immacolata, a firefighter scrambles up to the top to place a wreath on the statue of the Virgin Mary.

Monastero di Santa Chiara
Vast, Gothic and cleverly deceptive, the mighty Basilica di Santa Chiara stands at the heart of this tranquil monastery complex. The church was severely damaged in WWII: what you see today is a 20th-century recreation of Gagliardo Primario’s 14th-century original. Adjoining it are the basilica’s cloisters, adorned with brightly coloured 17th-century majolica tiles and frescoes.

Basilica di San Lorenzo Maggiore
The basilica at this richly layered religious complex is deemed one of Naples’ finest medieval buildings. Aside from Ferdinando Sanfelice’s facade, the Cappella al Rosario and the Cappellone di Sant’Antonio, its baroque makeover was stripped away last century to reveal its austere, Gothic elegance. Beneath the basilica is a sprawl of extraordinary Graeco-Roman ruins, accessible on a one-hour guided tour. To better understand the ruins, start your explorations in the Museo dell’Opera di San Lorenzo Maggiore, which includes a model of the area as it appeared in ancient times. The ruins themselves will see you walking past ancient bakeries, wineries, laundries and barrel-vaulted rooms that once formed part of the city’s two-storey macellum (market). Above them, the basilica itself was commenced in 1270 by French architects, who built the apse. Local architects took over the following century, recycling ancient columns in the nave. Catherine of Austria, who died in 1323, is buried here in a beautiful mosaiced tomb. Legend has it that this was where Boccaccio first fell for Mary of Anjou, the inspiration for his character Fiammetta, while the poet Petrarch called the adjoining convent home in 1345.

Chiesa di Sant’Anna dei Lombardi
This magnificent church is testament to the close links that once existed between the Neapolitan Aragonese and the Florentine Medici dynasty. One particular highlight is Guido Mazzoni’s spectacular Pietà. Dating from 1492, the terracotta ensemble is made up of eight life-size terracotta figures surrounding the lifeless body of Christ. Originally the figures were painted, but even without colour they still make quite an impression. Also impressive is baroque painter Francesco Solimena’s arresting depiction of St Christopher. The sacristy is a work of art in itself. The walls are graced with gloriously inlaid wood panels by Giovanni da Verona, while the ceiling bursts with 16th-century frescoes by Giorgio Vasari depicting the Allegories and Symbols of Faith.

Duomo di Napoli
Whether you go for Giovanni Lanfranco’s fresco in the Cappella di San Gennaro (Chapel of St Janarius), the 4th-century mosaics in the baptistry, or the thrice-annual miracle of San Gennaro, do not miss Naples’ cathedral. Kick-started by Charles I of Anjou in 1272 and consecrated in 1315, it was largely destroyed in a 1456 earthquake. It has had copious nips and tucks over the subsequent centuries.
Among these is the gleaming neo-Gothic facade, only completed in 1905. Step inside and you’ll immediately notice the central nave’s gilded coffered ceiling, studded with late-mannerist art. The high sections of the nave and the transept are the work of baroque overachiever Luca Giordano.
Off the right side of the nave, the Cappella di San Gennaro (also known as the Chapel of the Treasury) was designed by Theatine priest and architect Francesco Grimaldi, and completed in 1646. The most sought-after artists of the period worked on the chapel, creating one of Naples’ greatest baroque legacies. Highlights here include Jusepe de Ribera’s gripping canvas St Gennaro Escaping the Furnace Unscathed and Giovanni Lanfranco’s dizzying dome fresco. Hidden away in a strongbox behind the altar is a 14th-century silver bust in which sit the skull of San Gennaro and the two phials that hold his miraculously liquefying blood.
The next chapel eastwards contains an urn with the saint’s bones and a cupboard full of femurs, tibias and fibulas. Below the high altar is the Cappella Carafa, a Renaissance chapel built to house yet more of the saint’s remains.
Off the left aisle lies the 4th-century Basilica di Santa Restituta, the subject of an almost complete makeover after the earthquake of 1688. From it you can access the Battistero di San Giovanni in Fonte. Western Europe’s oldest baptistry, it’s encrusted with fragments of glittering 4th-century mosaics.
The Duomo’s subterranean archaeological zone, which includes fascinating remains of Greek and Roman buildings and roads, remains closed indefinitely.

Like a lot of cities and travel destinations, it’s possible to purchase a discount card in Naples that enables you to have free/discounted access to various historical and cultural sites around the city. Sometimes these things are worth it, sometimes they are not.

In Naples however, I would strongly advise picking up a Campania >artecard swiftly after arriving in the city.

You can buy your pass online, on the >artecard app, at an >artecard point and at the ticket office of various tourist sites (at the Archaeological Museum, at Pompeii, etc)

There are variations of the Campania Artecard available and the most suitable will depend on your personal interests and your intended Naples itinerary.

The cards allow free access to some sites, free use of public transportation, and reduced entry at additional sites. Prices start from €12 for those under 25, and €21 for those over 25. Either way, it will save you a fair bit.