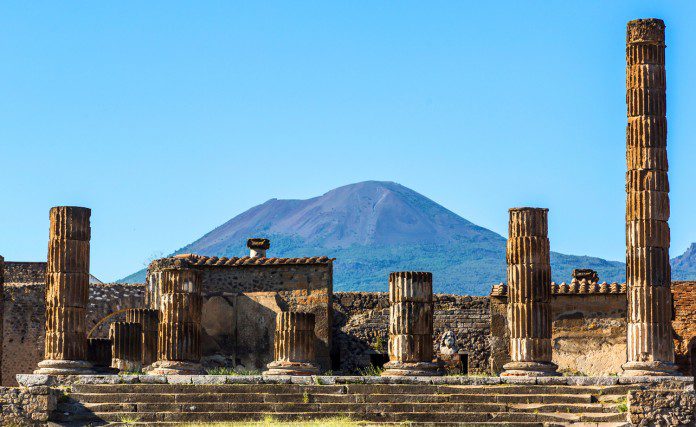 It’s one of Italy’s most amazing attractions.  An entire Roman town, buried under ash and lava by the eruption of Vesuvius in 79AD then excavated so you can wander around.  If you get the chance to go, take it.  It’s just south of Naples and can be done as an easy day trip by local train.

Pompeii was one of the largest and most shining cities built during the roman era, as you can see how) the ruins are everywhere. Thanks to its large production and export of oil and wines, Pompeii became a very rich city and tourist destination for the Roman patricians. You never know what Pompeii would have become. In ’79 AD, Vesuvius, which no one knew was a volcano yet because it looked like a common mountain, destroyed the town with a violent eruption.

The Forum
Located in the archaeological site of Pompeii was the economic, political and religious city center. It was the place where all public debates and religious events were carried out, and it was the real heart of the city. At the beginning, it was a not a very large area, and there were few shops showing their merchandise. During the second century BC, people of Pompeii decided to give a more appropriate structure to the Forum on the basis of the task it held. The area was enlarged, some coverings were added for the shops, arcades were added to protect walking people from the rain, and public buildings were built along the sides of the square. The decoration of the Forum of Pompeii was completed with the replacement of the old tuff flooring with a more beautiful one made of travertine, the remains of which are still visible today. Once at the center of the square, the ruins of the Temple of Apollo attracts the eye. It is the most important ancient religious site of Pompeii. The statues of the goddess found close to the Temple of Apollo, were transferred to the Archaeological Museum of Naples.

The Lupanar
People of Pompeii, as good pagans, loved the pleasures of the flesh and didn’t have any problem showing off their passions. Many houses of Pompeii, had a secret room in which slaves of rich masters whored themselves. You could buy a little bit of company by paying from two to eight “assi” (currency of Pompeii at that time), an accessible amount for almost everyone, considering that the average price for a glass of wine was of one “asse”. The Lupanar (from Lupo meaning wolf, because “wolf” in Latin means “prostitute”) is the only building in Pompeii built specifically for this purpose. The brothel, located in the ruins of Pompeii, was distributed on two floors, each one reserved for a certain type of customer. The ground floor made by five bedrooms, a hallway and a bathroom, was for lower class customers. The first floor, however, was reserved for the upper class customers. Its own entrance and balcony roof gave access to the rooms, and it was also decorated with a refined taste. On the walls, you can still see the little pictures drawning voracious lovers in different erotic positions, ideal for lazy lovers looking for some inspiration. At the entrance of the Lupanare, as in most modern coffee shops, there was the chance to buy condoms to use with charming slaves of the brothel.

The house of the Faun
The owner of the “House of the Faun”, inside the archaeological site of Pompeii, would definitely have been one of the most envied men in the city. The ruins of the house suggest a huge complex, with rooms, environments, and areas dedicated to different tasks. The property owner’s identity could not be traced back by remains. The structure has been  called the “House of the Faun” for the bronze statue of the dancing faun, who was at the center of one of the main halls. The “House of the Faun” was a sort of a modern residence, in which there was also a kind of mall. The structure, in fact, consists of two large connected areas, each one with a separated entrance, connected by a series of shops rented to traders. In addition to the shops, the “House of the Faun” also had a good number of rooms, but nobody knows if they were for private use, or rented. The structure was built with very modern construction techniques: some lead plates were placed under the walls plaster to protect the environment from moisture. In Rome, there is no trace of such majestic houses, while in the archeological site of Pompeii there are facilities such as “The Villa of the Mysteries,”, “The House of Pansa”, and “House of the Labyrinth”. They are all smaller than the “House of the Faun” but just as important in order to understand the richness and greatness of the Roman ruling class of Pompeii.

The Amphitheater
Located at the end of Via dell’Abbondanza, in the archeological site of Pompeii, is the oldest stone building of its kind that has ever been discovered. In fact, its construction dates back to 80 BC, while the first amphitheater of Rome, the one of Statilio Tauro, was built in 29 BC. One peculiarity of the amphitheater found in the excavations of Pompeii is that the structure had no basement under the floor of the arena, as the same construction of the imperial age used to have. At the top of the Amphitheatre you can see the large holes used to shore up the roof of the arena, in order to protect the spectators from the sun beating, wind, and rain. In this way, the shows could take place at any time of the year, without having to worry about the seasons. The terraces of the Amphitheatre of the archaeological excavations of Pompeii were divided into three orders, and one of these was reserved, with no doubt, for women. This timeless place has been the scene of one of the most exciting rock history concerts. In 1971, in fact, Pink Floyd recorded their “Live at Pompeii” concert without an audience, which became one of the most memorable moments in the music history.

The Villa of the Mysteries
This is an ancient roman house, located slightly outside the city and the archaeological site. It is not possible to verify the owner of this great building, also in this case, but some ruins suggest that the owners could have been some rich Roman patrician.  Some people argue that the villa belonged to Livia, the wife of Emperor Augustus, since there was a statue found in the ruins representing her. The Villa of the Mysteries takes its name from a series of paintings discovered in a room of the house, which some experts are still trying to determine the meaning. All schools of thought agree that the frescoes represent a young woman who is initiated into a cult. The dispute is about the kind of ritual that was initiated on the woman. Some argue that it is a Dionysian rite, while others simply believe that the woman is prepared for marriage. Whatever ritual to which the frescos of the Villa of the Mysteries in Pompeii refer , these images instil into visitors a strong subjection . The villa had many rooms, all decorated with great elegance and many of which were for dinners and social events. Even in the Villa of the Mysteries, bodies were found of people who were doing normal daily activities ,when they were blown over by the violence of the Vesuvius lava.

The Cave Canem mosaic
Maybe you have seen it at the entrance of some villas in Italy or in the world? The Cave Canem (Beware of the Dog in Latin) is one of the world’s most famous mosaics, and it’s right here, in the House of the Tragic Poet. It has been recently restored in order to bring back its ancient splendour, after years of neglect, with a device that protects it from rain and wind, but does not prevent the view. The House of the Tragic Poet is a typical house with atrium and takes its name from a mosaic placed at the National Archaeological Museum of Naples.

The Garden of the Fugitives
It is the most heartbreaking testimony of the end of Pompeii, for sure, with the eruption of Vesuvius in 79 AD. During the excavations of 1961-62 and 1973-74, the bodies were found of 13 victims of the eruption, surprised by lava and lapillus while they were running away towards Porta Nocera. Men, women, and children, of one or more family groups, were asphyxiated by the gases and then slowly covered with ashes. The ones you see today in the Garden of the fugitives are perfect reproductions in plaster, which enable us to understand the last moments of life of these inhabitants of Pompeii.

The most common ways of getting to Herculaneum from Napoli are:

The ruins are open every day of the year, usually 09:00-19:30 April-October, 09:00-17:00 November-March, but check opening times and entrance fee at www.pompeiisites.org or www.pompeionline.net.
Allow more time than you think you need.  You can easily spend all day there, there’s lots to see.

Next to the ticket office at the entrance, there is a free baggage check. Bags or backpacks larger than 30x30x15 cm cannot be brought into.

Should I visit Pompeii or Herculaneum?

The biggest difference between Pompeii and Herculaneum is size: the ruins of Pompeii cover about 44 square hectaures, while Herculaneum covers just 4.

Pompeii was an important city and trade center, while Herculaneum was a small resort town without the large public buildings (forum, amphitheater, theaters, gym) found in Pompeii.

However, Herculaneum is in a much better state of preservation due to the deep layer of ash and dust that covered the site, filling the buildings without damaging them. Pompeii was heavily battered by falling rocks and hot air that knocked down upper floors of buildings and incinerated wood, both of which are still intact at Herculaneum.

All things considered, if you only have time to see one site, choose Pompeii. Herculaneum is a good alternative if you don’t want to do too much walking or if the temperatures are particularly scorching, as it has more shade than Pompeii.

We do not recommend visiting Pompeii and Herculaneum in one day, as it is simply too tiring.